Encouragement for the Ladies: 'BETTY ZANE AND THE SIEGE OF FORT HENRY, SEPTEMBER 1782' 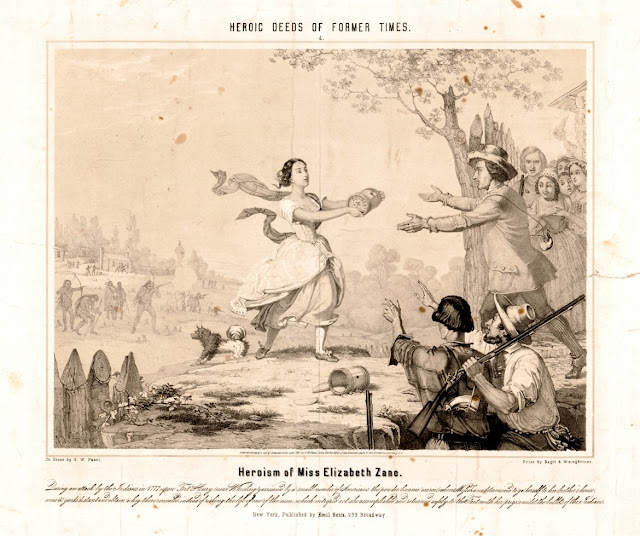 Written by Eric Sterner and posted at Journal of the American Revolution:


"The military stores in Ebenezer Zane’s house were achingly close, but still too far to easily reach without passing through a long gauntlet of hostile warriors, soldiers, and gunfire. The fort’s defenders held a council and decided that one of them should run the gauntlet to retrieve gunpowder from Zane’s house. The colonel’s younger sister, Elizabeth Zane, volunteered. When some objected that a man could make the trip with less risk, she allegedly replied, 'and should he fall, his loss will be more severely felt. You have not one man to spare; a woman will not be missed in the defence of the fort.'[21] The men agreed. She removed clothing that would slow her down, then charged out of the fort when the gates were opened. Her gender reportedly stunned the attackers, who did not feel compelled to attack a woman. They may not have realized the purpose of her dash. Reaching the cabin, Ebenezer let her in. He and his defenders wrapped a tablecloth around her waist and then poured a kegs’ worth of powder into it so she could run back. This time, the Indians reacted, firing at her unsuccessfully during her entire run to the gate.[22] Betty Zane had saved the fort in what became known as the 'gunpowder exploit.'"

Please read more about the siege at Fort Henry and the courageous Betty Zane here.

Thank you for the courageous women of the founding of America like Betty Zane. We appreciate the preservation of her memory and the excellent role model she is for future daughters of this once great nation. Please forgive us for our sins of ignorance and outright rebellion. I pray You will have mercy upon us and cleanse our hearts. I pray America will turn back to what is right and good and truly become a Christian nation.