She finished the race... 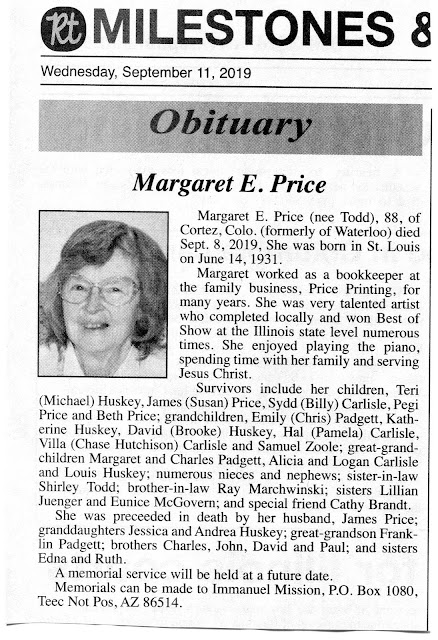 Wherefore seeing we also are compassed about with so great a cloud of witnesses, let us lay aside every weight, and the sin which doth so easily beset us, and let us run with patience the race that is set before us... (Hebrews 12:1 KJV)

Her name was Margaret and she was a simple housewife when I met her in 1994. I was a new babe in Christ - zealous for good works and had attended a local Right to Life meeting. I remember Margaret bursting into the room where we met and volunteering to deliver pro-life voters guides to area churches. I sat there staring in amazement at this middle aged woman who had the energy and enthusiasm of a teenager. She smiled and laughed with glee as she hurried out the door on her quest to advance righteousness in our little community. Little did I know that the Lord had chosen this woman to be my spiritual mother and Christian role model.

In 1995 I stepped out in faith and ran for a position on our local government school board - Margaret and another friend supported me. At the time it was a bit controversial as I was an unknown mother and housewife. Few people thought I would win and some fellow believers tried to discourage me from seeking office. I laid it out before the Lord and told Him I believed He could use a weak, foolish woman on school board. And, dear friends, He heard me and placed me there. It was probably the most difficult time of my life. My husband didn't support me and some Christians were embarrassed of me. The teachers lounge reportedly had my picture hanging up in order to mock me. My two sons suffered from poor grades due to their biology teacher being the head of the local teacher's union. But through all the controversy, tears and sleepless nights, two women stood by me faithfully - and one was Margaret Price. I don't recall Margaret ever missing a school board meeting. Once she even dressed in disguise to attend because the school superintendent and other board members were attempting to discredit her and bring shame to her family business and name. But Margaret stood firm and even confronted the superintendent for his lack of Christian fidelity.

Margaret shared many of my sorrows and joys. She was a rock to me when my mother passed away from an aggressive form of cancer. Margaret spent countless hours on the phone mentoring me and she set a fine example of godly womanhood for me to follow. Years later I confessed to Margaret that I was a new believer during the period of time I was on the Waterloo School Board and she was truly surprised. You see Margaret had discipled me without even making an effort to do so - she just lived her faith.

I remember once she told me that she had posted a sign on the family business window that said "I have a relationship with Christ." What she didn't realize was something had covered up the "with Christ" part and all the people passing by saw was a sign saying "I have a relationship" - she laughed with glee while telling the story. Margaret certainly had a wonderful sense of humor!

As our friendship progressed she confided that the older she got, the more sinful she felt and could only marvel at the grace of Christ. I thought it was odd for her to think that as she was the most godly woman I knew - but now as I'm older, I understand.

Margaret Price had a living, loving, joyful relationship with Christ and, dear friends, she has finished the race well. I look forward to our reunion in Heaven and truly believe we will both be on our knees worshiping our Lord and Savior together for all eternity. Amen.
Email Post
Labels: Godly Womanhood