Roy Moore Should Take Responsibilty for His Campaign Loss

Frankly I'm relieved the special election in Alabama is over and Roy Moore did not win. But, I am dismayed that some of his supporters are blaming fellow believers for his loss; it seems they feel that the Christians who didn't support Moore are to blame for him not being elected to the US Senate. Plus, I saw a news clip this morning of Roy Moore blaming the allegations of sexual misconduct as a reason his campaign lost.

Friends, if Roy Moore were a man of sterling character like his supporters believe, he would take responsibility for his campaign loss. It didn't have to end this way. When the allegations of sexual misconduct and molestation, plus the stories of dating teen girls as a man in his 30's came forth, the responsible and Christian action would have been for Roy Moore to step aside until he could disprove the allegations. If he had done this, another Republican candidate could have come forth and ran in Moore's place and probably been elected. Instead, Mr. Moore took a page out of Donald Trump's playbook and thought he could just bulldoze his way through the campaign while casting doubt on the character of the women coming forth to tell their stories of alleged sexual abuse and  improprieties with teens. Well, it didn't work for Roy Moore and now Alabama has a pro-abort senator taking Jeff Sessions place and the preborn babies lose.

Will Roy Moore and his supporters take this opportunity to reflect upon their actions and make improvement for future campaigns? Or will they continue to shift the blame everywhere but where it squarely belongs which is on Roy Moore's shoulders? Only time will tell. 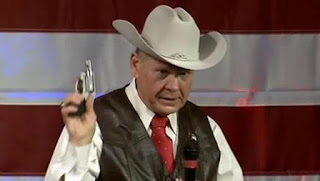 Roy Moore has released a campaign statement in which he sadly shows no inclination to take responsibility for his actions or the loss of the Senate seat.