'Good people, I have come hither to die and by a law I am condemned to the same. The fact, indeed, against the Queen's Highness was unlawful and the consenting thereto by me. But touching the procurement and desire thereof by me or on my behalf I do wash my hands in innocence. Before God and the face of you, good Christian people, this day I pray you all, to bear me witness that I die a true Christian woman, and that I look to be saved by none other means, but only by the mercy of God, in the merits of the blood of his only son, Jesus Christ. And I confess, when I did know the word of God, I neglected the same, loved myself and the world, and thereto the plague or punishment is happily and worthily happened unto me for my sins. And yet, I thank God of His goodness that he hath thus given me a time and respite to repent. And now good people, while I am alive, I pray you to assist me with your prayers.'
(Lady Jane Grey's Address from the Scaffold, Feb. 12, 1554)

I cannot help but be humbled and amazed at the gracious love for our Saviour that this Lady of the Lord displayed just moments before her execution. May the good Lord grant us all such gentleness and grace!

Our Christian heritage as Godly women is one full of courage, love and faith in our glorious Redeemer. Due to love for God and the brethren, many women throughout history have dared to perform great exploits and many have suffered martyrdom for their faith.

Let's take a little walk through Christian history and get to know some of these true Christian women of the faith: 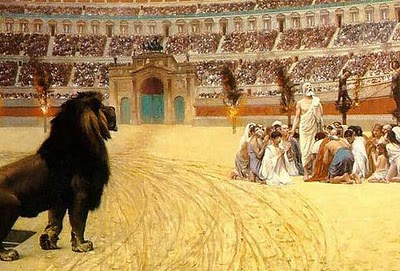 Two heroines of the early Christian Church were Perpetua and Felicitas. Perpetua was from a wealthy Roman family in the first century, while Felicitas was a slave. Both women were young, courageous and would not recant their faith in Jesus Christ. As a result, the two women were torn by wild beasts in a Roman arena and then killed by Gladiators. These women will be remembered for all eternity as they stood firm on the Rock of Christ Jesus and did not fear death more than the One who made them and called them into salvation.

One of my favorite heroine's is a simple, uneducated woman named Jenny Geddes. In July of 1637, Jenny was attending Worship at her Church when she witnessed the Dean of Edinburgh introduce a different style of Worship than Presbyterian. Jenny promptly picked up the small stool she was sitting on and hurled it through the air at the dean. This simple defiant act of Jenny's sounded the alarm and the entire congregation (rich and poor alike) began tossing their Bibles, stools and other objects at the minister. Needless to say, the service was ended and Presbyterian Worship was preserved.

Jenny Geddes has been credited with sounding the alarm which led to the Scottish National Covenant, English Civil War, the execution of Charles I and Cromwell's conquest of Scotland.


One of the most inspirational stories from the reformation period is of a young woman named Margaret Wilson. Margaret was tied to a stake in 1685 and drowned in the Solway tide in Scotland.

Here is the account of Margaret Wilson's last moments of life:

"She [Margaret] read aloud from the eighth chapter of Romans, in full assurance of faith of the glory soon to be. 'Whom He justified them he also glorified'; and, convinced of His bearing her through to His praise, 'we are more than conquerors through him that loved us. For I am persuaded that neither death nor life, nor angels, nor principalities, nor powers, nor things present, nor things to come, nor height, nor depth, nor any other creature, shall be able to separate us from the love of God, which is in Christ Jesus our Lord.' The cold waves dashed over her head. Loosely tied, the soldiers pulled her out of the water, and when she could speak they asked her to do what the Covenanter could not do - pray for the King, 'as he is supreme over all persons and causes, ecclesiastic as well as civil,' a blasphemous usurping of the prerogative of Christ as Head of the Church, an arrogant claim which no Covenanter would admit. 'Pray for the King,' they cried! She murmured that she wished the salvation of all men, and the damnation of none. They dashed her under the water and pulled her out again. 'Oh, Margaret, say it,' pleaded some. 'Lord, give him repentance, forgiveness and salvation, if it be Thy holy will,' she whispered. Grierson of Lagg, in wild, impatient passion cried, 'Damned bitch, we do not want such prayers. Tender her the oaths.' She groaned, 'No! No! no sinful oaths for me. I am one of Christ's children. Let me go.' And they brutally flung her back into the waters, where she died a virgin martyr of eighteen summers." (Source: Fair Sunshine: Character Studies of the Scottish Covenanters)
Margaret's remains are buried in the old Wigtown Churchyard. 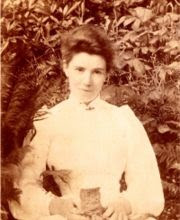 My personal role model is the 'true Christian woman' Amy Carmichael. I remember reading her biography a few years ago and praying for the LORD to make me a woman like Amy as she had left all ( her home and family) at the young age of twenty-six years to go to China in 1893.

Due to poor health, Amy was then advised the climate in India would be more suitable for her, so she then went on to India at age twenty-eight to serve as a missionary. Amy founded the Dohnavur Fellowship where unwanted Indian children were given love, a home and taught the knowledge of Jesus Christ. Amy Carmichael then spent most of her life rescuing little girls and boys that were on their way to being abused and used as temple prostitutes. This ritual was finally outlawed in 1948.

Amy's work at Dohnavur Fellowship, located near the tip of India, still goes on today. I believe it is because she had vowed to live her life for the glory of Christ and then in faith risked that very same life to serve Him without compromise.