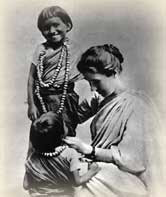 The tom-toms thumped straight on all night, and the darkness shuddered round me like a living, feeling thing. I could not go to sleep, so I lay awake and looked; and I saw, as it seemed, this:
That I stood on a grassy patch, and at my feet a ravine broke straight down into infinite space. I looked, but saw no bottom; only cloud shapes, black and furiously coiled, and great shadow-shrouded hollows, and unfathomable depths. Back I drew, dizzy at the depth.
Then I saw forms of people moving toward the edge. There was a woman with a baby in her arms and another little child holding on to her dress. She was on the very edge. She lifted her foot for the next step... Then, to my horror, I saw that she was blind. Before I could say anything she was over, and the children with her. Their cries pierced the air as they fell into the inky blackness of the ravine!
Then I saw more streams of people flowing from all quarters. All were blind, stone blind; all walked straight toward the edge. There were shrieks as they suddenly knew themselves falling, and a tossing up of helpless arms, catching, clutching at empty air. But some went over quietly, and fell without a sound.
Then I wondered, with a wonder that was sheer agony, why no one stopped them at the edge. I could not. I was glued to the ground, and I couldn't even yell; though I strained and tried, only a whisper would come out.
Then I saw that along the edge there were sentries set at intervals.
But the intervals were too large; there were wide, unguarded gaps between. And over these gaps the people fell in their blindness, unwarned; and the green grass seemed blood-red to me, and the ravine yawned like the mouth of hell.
Then I saw, like a little picture of peace, a group of people under some trees with their backs turned towards the ravine. They were making daisy chains. Sometimes when a piercing shriek cut the quiet air and reached them, it disturbed them and they thought it was a rather crude noise. And if one of their group started up and wanted to go and do something to help, then all the others would pull that one down. "Why should you get so excited about it? You must wait for a definite call to go! You haven't finished your daisy chain yet. It would be really selfish," they said, "to leave us to finish the work alone."
There was another group. It was made up of people whose great desire was to get more sentries out; but they found that very few wanted to go, and sometimes there were no sentries for miles and miles along the edge.
Once a girl stood alone in her place, waving the people back; but her mother and other relations called, and reminded her that her furlough was due; she must not break the rules. And being tired and needing a change, she had to go and rest for awhile; but no one was sent to guard her gap, and over and over the people fell, like a waterfall of souls. Once a child grabbed at a tuft of grass that grew at the very edge of the ravine; it clung convulsively, and it called - but nobody seemed to hear. Then the roots of the grass gave way, and with a cry the child went over, its two little hands still holding tight to the torn-off bunch of grass. And the girl who longed to be back in her gap thought she heard the little one cry, and she sprang up and wanted to go; at which her friends reproved her, reminding her that no one is necessary anywhere; "The gap would be well taken care of!", they said. And then they sang a hymn.
Then through the hymn came another sound like the pain of a million broken hearts wrung out in one full drop, one sob. And a horror of great darkness was upon me, for I knew that it was "The Cry of the Blood".
Then a voice thundered. It was the voice of the Lord, and He said, "What hast thou done? The voice of thy brother's blood crieth unto me from the ground."
The tom-toms still beat heavily, the darkness still shuddered and shivered about me; I heard the yells of the devil-dancers and weird, wild shrieks of the devil-possessed just outside the gate.
What does it matter, after all? It has gone on for years; it will go on for years. Why make such a fuss about it? God forgive us!
God arouse us! Shame us out of our callousness! Shame us out of our sin!
1 John 3:17 Paraphrased by Amy Carmichael
"But whoso hath the gospel of Jesus Christ, and seeth the heathen lost and dying in their sin, and shutteth up his bowels of compassion from him, how dwelleth the love of God in him?"
Email Post
Labels: Amy Carmichael Godly Womanhood