While following the 2016 Presidential jockeying of the candidates from both political parties, I fear we will have Hillary in the White House. This is abhorrent to me for many reasons: she's un-apologetically pro-abortion, flip-flops on issues, is untrustworthy and frankly, she's a woman. I realize other nations have had respectable women as leaders, and I admit Margaret Thatcher did much good for Great Britain, but Hillary Clinton is no Margaret Thatcher. She simply doesn't have the moral clarity or Christian foundation needed to be a good leader. And I just don't see the Republicans as being much better than the Democrats on social issues. I lack confidence in their ability to make any significant changes; for example, they lack the backbone to take a stand for the absolute end of the murder of the preborn. They are also too divided among themselves, and I don't believe they're able to win the White House in the next election.

At this point I plan to continue non-conformity for the same reasons as in 2012:

2012 Elections: Why I've decided to dissent


Disagreement, non-conformity, and opposition to our present government and the current two-party system is not a bad thing for a Christian to do and this is why I've decided to dissent and not vote in the 2012 elections. And while there may be some worthy third party candidates, I just can't find one to vote for at this time - sorry. Perhaps if I were more ignorant about the current candidates and political parties, I would have a clear conscience and could vote for either the lesser of the two evils (Romney/Obama) or a candidate running on a third party platform that looks great on paper, but lacks in actual practice by the party leaders and their candidates.

Some critics might charge that I am seeking perfection in a candidate, but those who know me realize that I have a pragmatic streak which can sometimes serve as a thorn in my flesh; I am continually looking for practical ways to advance the Kingdom of our Lord Jesus Christ and often have to put a halt to my activities because they just don't line up with Scripture, which is the Christian's standard for life.

Plus, as a modern woman I struggle with independence and Biblical submission to the authorities God has placed over me, including my husband. Some Christian ladies might find this quite shocking, but I think the head of the household should represent their families in the voting booth. So, instead of rolling up my sleeves and doing the "man's job," I've decided to keep my sleeves unrolled and encourage him to do his job. This doesn't mean I've become politically idle and culturally irrelevant, but instead I've taken on a more supportive role and declined those roles requiring male leadership.

So, dear reader, let's take a look at political wisdom passed on to our generation from the Scottish Covenanters, who historically dissented from voting in the united States until the 1970's.

"The American Revolution, which was also a civil war, began. The segment of Americans who truly supported the war included all of the Society People, all Seceders, indeed all Presbyterians. Americans of Scottish descent loved this war against England. They remembered the years of oppression and persecution at English hands. An Episcopalian from Philadelphia said, 'A Presbyterian loyalist was a thing unheard of.'

A representative of Lord Dartmouth wrote from New York in November 1776:

“'Presbyterianism is really at the bottom of this whole Conspiracy, has supplied it with Vigour, and will never rest, till something is decided upon it.'

"A Hessian captain wrote in 1778, 'Call this war by whatever name you may, only call it not an American rebellion; it is nothing more or less than a Scotch-Irish Presbyterian rebellion.' King George III himself was reported to have called the war a Presbyterian War.

'With French help, the Americans won. A new nation emerged. Reformed Presbyterians no longer needed to dissent from an ecclesiastical and political establishment that denied the covenants. Then the states ratified a new constitution, written in secret in Philadelphia in 1787. The Covenanters were aghast at its secularism. Governments of Christian lands had acknowledged Christ’s reign since Roman times, but the United States Constitution conspicuously omitted any reference to God or Christ. In Scotland the main issue had been the independence of the Christian Church from a professedly Christian King. In America, the issue was the government’s wholesale denial of Christ’s authority over the nations."

In the book Our Covenant Heritage - The Covenanters' Struggle for Unity in Truth by Edwin Nisbet Moore, can be found timeless Biblical principles helpful to understanding and practicing the 'obligations between Church and State.' Below is a list of principles found in chapter 13, Lessons for Citizens: Church and State - Their Common Obligations: 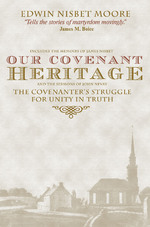 [Please note this is just a list and the book explains these principles in greater detail.]

Principle #1 The church and state are of entirely distinct and have immiscible natures and purposes; however they share many mutual obligations. [page 341]

Principle #3 The state is obligated to promote good and punish evil, according to the Word. [page 347]

Principle #4 States are obligated to honor and acknowledge Jesus Christ, and mold their institutions and behavior in conformity with Christian principles. [page 350]

Principle #5 When God transforms a state into a Christian nation, the people, state, and church should covenant to establish and preserve the true religion. [page 352]

Mr. Moore then concludes this section with a summary and states "a Christian nation is a desired and promised blessing from God that we should seek. Although it is appropriate for a Christian people to covenant with God, it is inappropriate for a Christian people to enter into covenant with an immoral state. The Covenanters, in the Solemn League and Covenant, found the right balance. They believed that the rights of God extend into both the ecclesiastical and civil spheres. They had a vision that the goal of the Great Commission was the conversion of nations..."

So, dear friends, in my quest to help establish a Christian nation, the decision to "dissent" and not vote in this election not only leaves me with a clear conscience, but with the hope that the good Lord will honor this decision and give America "a man after His own heart" for Christians to elect to the highest office in our land.


May the good Lord hear the prayers of His people and keep our hope pinned upon Him and not 21st Century politicians. In Lord Jesus Name, I pray, amen.
2016 Elections Christian Citizenship Christian Ethics Christians and Politics