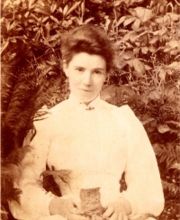 'Please help me! Please don't send me back!' screamed 7-year-old Preena as she jumped into Amy Carmichael's lap, clinging to her neck. The little girl had just escaped from a Hindu temple in the middle of the night while her guardians were sleeping. She tiptoed quietly through an unlocked door and pushed open the heavy gate running as fast as she could.

Preena's mother had given her to the temple priests in hopes of winning the favor of the gods. Amy did not know what was going on, but she knew this little frightened girl needed her love and protection.
- Posted at Church History Timeline/ Christianity.com


One of my favorite Christian heroines is Amy Carmichael, who lived during the Victorian era, was a missionary to India and who effectively stood against the common religious practice of child prostitution. In the biography "A Chance to Die - The Life and Legacy of Amy Carmichael," Elisabeth Elliot makes the point that while Amy was a strong advocate for the children, rescued many and helped heal their wounds, she probably did not know the depths of evil that the children had been saved from.

Amy hadn't been married, nor had she been subjected to all the sex information our generation is, so she probably didn't know the sordid details of the sex abuse of the children she rescued from temple prostitution, but she knew that the children were being used for evil and as a Christian she had a duty to do all she could to make a difference for good.

So, this morning as I was scanning the headlines, I came across news headlines reporting Sarah Palin's comments on the Duggars and Lena Dunham. First of all, I'm no fan of Sarah Palin, nor do I even know who Lena Dunham is. (Yes, there are a few of us who are behind the times and don't follow the latest culture crazes or sensations.) But what disturbs me is learning sordid details about what Ms. Dunham did as a 7 year-old child. Frankly, I'm wondering why on earth she even told about her childhood experience. Was it to cause a sensation? Humiliate her parents and sister? Shock some "puritan" minded soul like me? Does the world really need to know the sordid details of one's past, especially that of  a 7 year-old child? No, it does not and Christians do not need to know sordid details in order to be effective when confronting evil.

A friend once told me that the comment section of blogs and/or news stories is hell. I've often thought he was right while feeling dirty after looking at them. One can have an excellent point of view and argument to back it up and then they have to insert profanity or some graphic language that leaves their argument in the dust covered with all sorts of unclean things.

So please, dear Christian brothers and sisters, leave the sordid details out of your reports and instead focus on how to end the wickedness - not the lurid details the world longs to hear.