'A woman who fears the LORD shall be praised' 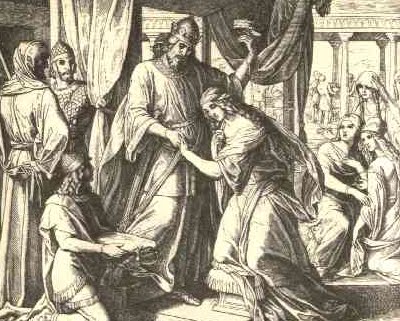 "Charm is deceitful, and beauty is vain, but a woman who fears the LORD shall be praised." (Proverbs 31:30)

I was recently reminded of the truth that a woman's beauty does not lay in her outward appearance (as this will fade); but true beauty is found in those women who fear the LORD. The type of beauty I am referring to is the beauty of integrity and conviction. When I read the accounts in Scripture of women who found great worth in the Lord’s eyes, I see women of strong character who feared the LORD more than man. It is my great pleasure to review with you what Scripture records about some of these beautiful women and the memorable deeds they performed in faith.

One of the first women who come to my mind is the prophetess Miriam who was also the sister of Moses and Aaron. Miriam is well known for the heroic story of hiding and watching the baby Moses as he floated in the Egyptian river and was found by Pharaoh's daughter. She was still a child herself when seeing the providential adoption of baby Moses by Pharaoh's daughter. One can only imagine how she must have marveled at the goodness of the Lord in preserving her baby brother. Then as an adult we have the recorded song she sang with the Hebrew women after they witnessed the destruction of Pharaoh's army in the Red Sea: "Sing to the LORD, For He has triumphed gloriously! The horse and its rider He has thrown into the sea!" (Exodus 15:21)

Let us not forget the account of Jael, Heber's wife, who drove a tent peg into the temple of Israel's enemy Sisera. Jael did not love her life more than God. Her story is recorded in the song of Deborah: "Most blessed among women is Jael, The wife of Heber the Kenite...He asked for water, she gave milk...She stretched out her hand to the tent peg, Her right hand to the workmen's hammer; She pounded Sisera...At her feet he sank, he fell, he lay still..." (Judges 5: 24 - 27).

Or who can forget the story of the lovely Ruth, a Moabitess, who left her people and her gods to follow her mother-in-law to Bethlehem and serve the God of Israel. I am often in awe at the courage Ruth displayed in lying at the feet of Boaz and asking him to be her kinsman redeemer. How shameful it would have been for her if Boaz would have refused...but, he welcomed her instead and Ruth became the great-grandmother of King David. Ruth is also listed in the genealogy of Jesus Christ.

My favorite heroine is Queen Esther who displayed great fear of the LORD when approaching the King without being called, knowing that she could very well be put to death for breaking this law. Please take note that Queen Esther did not dare to approach the King until after 3 days of fasting by the Israelites, her maids and herself. She received a favorable response and prepared a banquet where the despicable plot to exterminate the Jews was revealed by Queen Esther. The man responsible was hanged and Esther was instrumental in saving her people from annihilation.

These are women who not only displayed charm and beauty, but who feared the LORD and they shall be praised for all eternity. Amen.