A Change of Heart Regarding Theonomy

For those who have received either my past newsletters or subscribed to my blogs: At the end of 2013, I retired the Christian Liberty newsletter.  I also deleted the blogs "Christian Liberty News" and "Reformed Christian Studies" because I had repented of pointing others to "bad" theology; and while they had some very good newsworthy posts, they also contained much theonomy. In fact, that was my main reason for creating the blogs in the first place.

Then after promoting theonomy and Christian Reconstruction for approximately a decade, I had a change of heart.  This wasn't an overnight or sudden change, but one that gradually took place over a period of months as I began to study the Reformers, their work and the Reformed Confessions of the 16th Century. I began to realize that while I agreed with the "general equity" of God's Law for civil government and agreed with the Reformers teaching of natural revelation and law, my views were no longer in sync with that of theonomy.  Here I had been telling folks for years that I subscribed to the Westminster Standards - yet I was ignoring its plain teaching on God's Law: 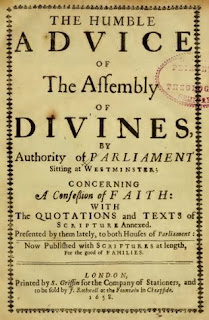 Westminster Confession of Faith: Of the Law of God - Chapter XIX
I. God gave to Adam a law, as a covenant of works, by which He bound him and all his posterity, to personal, entire, exact, and perpetual obedience, promised life upon the fulfilling, and threatened death upon the breach of it, and endued him with power and ability to keep it.[1]
II. This law, after his fall, continued to be a perfect rule of righteousness; and, as such, was delivered by God upon Mount Sinai, in ten commandments, and written in two tables:[2] the first four commandments containing our duty towards God; and the other six, our duty to man.[3]
III. Besides this law, commonly called moral, God was pleased to give to the people of Israel, as a church under age, ceremonial laws, containing several typical ordinances, partly of worship, prefiguring Christ, His graces, actions, sufferings, and benefits;[4] and partly, holding forth divers instructions of moral duties.[5] All which ceremonial laws are now abrogated, under the New Testament.[6]
IV. To them also, as a body politic, He gave sundry judicial laws, which expired together with the State of that people; not obliging under any now, further than the general equity thereof may require.[7]
V. The moral law does forever bind all, as well justified persons as others, to the obedience thereof;[8] and that, not only in regard of the matter contained in it, but also in respect of the authority of God the Creator, who gave it.[9] Neither does Christ, in the Gospel, any way dissolve, but much strengthen this obligation.[10]
VI. Although true believers be not under the law, as a covenant of works, to be thereby justified, or condemned;[11] yet is it of great use to them, as well as to others; in that, as a rule of life informing them of the will of God, and their duty, it directs and binds them to walk accordingly;[12] discovering also the sinful pollutions of their nature, hearts and lives;[13] so as, examining themselves thereby, they may come to further conviction of, humiliation for, and hatred against sin,[14] together with a clearer sight of the need they have of Christ, and the perfection of His obedience.[15] It is likewise of use to the regenerate, to restrain their corruptions, in that it forbids sin:[16] and the threatenings of it serve to show what even their sins deserve; and what afflictions, in this life, they may expect for them, although freed from the curse thereof threatened in the law.[17] The promises of it, in like manner, show them God's approbation of obedience,and what blessings they may expect upon the performance thereof:[18] although not as due to them by the law as a covenant of works.[19] So as, a man's doing good, and refraining from evil, because the law encourages to the one and deters from the other, is no evidence of his being under the law: and not under grace.[20]
VII. Neither are the forementioned uses of the law contrary to the grace of the Gospel, but do sweetly comply with it;[21] the Spirit of Christ subduing and enabling the will of man to do that freely, and cheerfully, which the will of God, revealed in the law, requires to be done.[22]
(Source: http://www.reformed.org/documents/wcf_with_proofs/ [emphasis mine])
My greatest desire is to bring glory to God and not help lead His people astray, so I plan to post mostly  historical and reformed articles, plus those relevant for the faithful church today at the new blogs: Christian Heritage News and Our Reformed Christian Heritage.
My change of heart does not mean that I've given up or thrown in the towel in the "culture wars." Instead it means I've fine tuned my understanding and methods of advancing the Gospel and seeking to see the Lord Jesus acknowledged as the Sovereign King of both Heaven and Earth. My theology has gotten more orthodox and its roots are deeper. If anything, this has caused me to look more deeply into the history, beliefs and work of the Scottish Covenanters, who I believe had a right view of Scripture and its implication for the nations. However, I'm still sorting things out while continuing to learn and I want to thank you all for the Christian love and patience shown to me in this matter.
I've assembled some links to resources which might be helpful for others who find themselves struggling with theonomy and God's Law as outlined in the Westminster Confession and other historical reformed works:

My hope and prayer for God's people is to have respect for each other with a sincere desire to grow together in the grace and knowledge of our Lord Jesus Christ. Amen.

No king but Jesus!