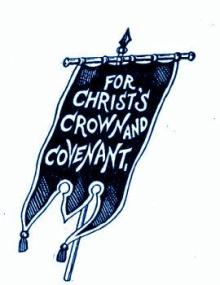 Perhaps the most enduring change during the 19th century involved participation in social reform movements. One cause favored by the denomination was the abolition of slavery, beginning officially in 1800, when members were prohibited from slave owning and from the slave trade. Enthusiastically supported by most members, the denomination took a strong stance against the Confederacy and faithfully supported the North in the Civil War, as Reformed Presbyterians enlisted to fight against the "slaveholders' rebellion." Abolition was a major factor in the decline of the denomination's South Carolina and Tennessee congregations: most members there, finding it hard to be abolitionists in slave-owning societies, moved to southern Ohio, Indiana, and Illinois; by the beginning of the Civil War, all of the old congregations in South Carolina and Tennessee were gone.
(Source: http://en.wikipedia.org/wiki/Reformed_Presbyterian_Church_of_North_America )

And Dr. William J. Edgar writes in A History of the Reformed Church:

Slavery. From 1800 onward, when Alexander McLeod refused a call from the Coldenham Church until its members freed all of their slaves, the RP Church forbade its members to hold slaves. McLeod explained his position in an 1803 pamphlet, Negro Slavery Unjustifiable. American slavery is based on the capital crime of man stealing, it establishes racial lines that have no biblical basis, and it denies the clear implications of Christian baptism. From then until the Civil War, Covenanters were extremely active in antislavery activities, including the Underground Railroad. At least one freed Black slave and his family were members of the Coldenham Church from 1851 and for 32 years. In some antislavery societies, Covenanters cooperated with unbelievers. In protest against these associations, two ministers David Steele and Robert Luak left in 1840 to form their own Reformed Presbytery, the “Steelites.” But the Church’s enthusiasm for anti-slave agitation only increased.