Wandering in the Wilderness 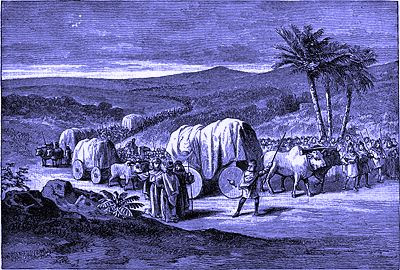 I have often heard Christians complain that the Church today is full of confusion, bad teaching, inept pastors and worldly Christians.  Listening to our complaints, one would think we had no Leader and the glory of the Lord no longer resides with His people. But then of course, many of us are quick to point out that the fault lies with someone else - not us, the faithful few and chosen.  Well, dear friends, I think it is time for us to individually search our hearts and see if we share some of the blame for the present "woes" of Christendom.

"If my people, which are called by my name, shall humble themselves, and pray, and seek my face, and turn from their wicked ways; then will I hear from heaven, and will forgive their sin, and will heal their land." (2 Chronicles 7:14 - KJV)

The Scripture quoted above is a popular one among Evangelical Christians.  It has been read and prayed at almost every public political gathering of the Lord's people that I have attended.  But for some reason our land is not yet being healed. Instead we are watching civilization crumble under the weight of heinous sin and wicked perversion.

Biblical scholar Arthur W. Pink (April 1886 – July 1952) wrote this in comparison of the glory of the Lord departing from the temple in Jerusalem and the spiritual state of the church at that time:

"The temple remained standing in Jerusalem for forty years after Christ pronounced the awful sentence of Matthew 23:28 before Titus destroyed it in AD 70: the priesthood continued to function and its services were perpetuated, but God no longer owned it. Thus it is with Christendom: the body still exists, but it is lifeless; the 'form of godliness' has not yet entirely disappeared, but its power has. Even the smaller groups who came out from the apostate mass, though some of them have preserved 'the landmarks of the fathers,' yet they are so pharisaical that the Spirit of God is quenched there too. Pride is as hateful to God as worldliness and false doctrine, and those who boast 'the temple of the Lord are these' (Jer 7:4), 'the Testimony of God is with us,' 'all others have departed from the Truth except our party'; are too lacking in spiritual discernment to perceive their own sad condition." (The Destruction of Dagon, Source: http://www.eternallifeministries.org/awp_dagon.htm )

It doesn't appear that we've made much progress since Mr. Pink made this observation, does it?  Perhaps, my dear friends, have we who believe we have the truth become prideful and pharisaical?  Do we talk down to our fellow man (and woman) when discussing the things of God? Do we take pride in our book learning and understanding of Scripture? Do we thumb our nose at the command of Christ to love our neighbor as ourselves while pointing out every jot and tittle where others have failed in following God's Law?  For those of us in the Reformed camp, the answer is "yes."   For those of us in the theonomic camp, the answer is a resounding "YES" and we often disciple others to be as obnoxious and argumentative as we are.  I'll be the first to admit my guilt before God and humbly ask His forgiveness.

"For thus saith the high and lofty One that inhabiteth eternity, whose name is Holy; I dwell in the high and holy place, with him also that is of a contrite and humble spirit, to revive the spirit of the humble, and to revive the heart of the contrite ones." (Isaiah 57:15 - KJV)

Is it time for you to humble your heart before God? Perhaps if enough of us do this, we will no longer be as wanderers in the wilderness. Amen.
Email Post
Labels: Pride and Humility Sanctification