Tinkering with the Gospel 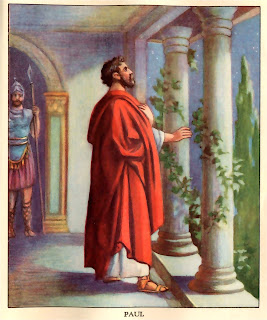 “I marvel that ye are so soon removed from him that called you into the grace of Christ unto another gospel: Which is not another; but there be some that trouble you, and would pervert the gospel of Christ. But though we, or an angel from heaven, preach any other gospel unto you than that which we have preached unto you, let him be accursed. As we said before, so say I now again, If any man preach any other gospel unto you than that ye have received, let him be accursed.”
- Galatians 1:6-9 KJV

“...If someone had told me 20 years ago that some 'evangelicals' would soon be teaching that God does not know everything (Open Theism), that Scripture is not infallible (we must not deny Scripture's humanness!), and that our justification before God rests, in some measure on our good works (the so-called New Perspective on Paul), I would hardly have believed it. But we live in spiritually and theologically confused times. It would only be too easy, for the sake of a peaceful life, just to go with the flow, to keep our heads down and reconfigure the gospel to suit the tastes of the world around us. To do this, however, would be to deny our Saviour, and to call down on our heads God's holy anathema. This is not an appeal for us to be belligerent or offensive, or cantankerous. We are always 'to speak the truth in love'. But love can, and needs at times to be, willing to risk the wrath of man to proclaim the truth of God.”
(Source: There is but One Gospel by Ian Hamilton; Banner of Truth Trust General Articles; URL: http://www.banneroftruth.org/pages/articles/article_detail.php?1718 )

I recently cautioned a friend about a pastor/author he was promoting who is well documented to be part of a group promoting a questionable doctrine called Federal Vision. The friend requested I provide specific quotes from the person in question. Frankly, the evidence against this particular teaching is vast and well documented by respected theologians, pastors and Bible teachers. Hence, the request for specific quotes seems to be a rabbit trail in the sense that one’s actions often speaks louder than one’s words, especially when the words of the FV proponents are reported to be ambiguous.

My goal with this editorial is not to cast stones or damage reputations of respected men, but only to warn the reader that if they should come across a teaching called the “Auburn Avenue Theology,” “Federal Vision” or “New Perspective on Paul,” they should be forewarned that this is considered by some to be a dangerous teaching that has compromised the Gospel.

In the introduction of “A Refutation of the Auburn Avenue Theology’s Rejection of Justification by Faith Alone,” (http://www.reformedonline.com/uploads/1/5/0/3/15030584/auburn_ave_book_web.pdf) Pastor Brian Schwertley writes:

"In the conservative Reformed world there has been a controversy raging since 2002 due to the introduction of a new theological paradigm called the “Auburn Avenue theology,” the “federal vision,” the Monroe doctrine,” or, “the objectivity of the covenant.”[1] On the one side of the debate there are people who argue that this new teaching is a breath of fresh air, a clarifying and reforming doctrine, another legitimate stream of Reformed covenantal thought. On the other side there is an increasing number of pastors, elders and scholars who are warning people that this new doctrine is dangerous and heretical. In the middle is a large group of people who are not sure what they think because: (a) they have not had time to study the issues; (b) the new teachings are difficult to understand; (c) the people who are advocating these new doctrines are popular Reformed writers and speakers known for being defenders of orthodoxy in the past; (d) the terminology used in the new theology is often ambiguous and confusing. This essay is directed to the large group of people in the middle who might say, 'What’s the big deal, can’t we all just get along?'

“The Auburn Avenue doctrine of justification is a radical departure from Protestantism, all the Reformed symbols, the teaching of all the Reformers and all of the notable Reformed theologians. According to the Monroe doctrine people are saved by a faith/works combination. They would argue that works or merit play no role whatsoever as the ground of justification but their definition of faith is inclusive of works (e.g. faith equals faithful obedience, covenant faithfulness, and the works of faith). As we examine how they arrive at their doctrine of justification, their teaching on this topic will come into focus. To people who are untrained in theology or hermeneutics their teachings are very confusing and are easily misunderstood.”

And while speaking before the PCA (Presbyterian Church America) General Assembly in June of 2007, it is reported that Dr. R.C. Sproul, Founder and President of Ligonier Ministries made this statement:

“I can’t fathom why there’s any hesitancy about [rejecting Federal Vision],” said R.C. Sproul, from the floor of General Assembly that afternoon. “There’s too much at stake—this is the gospel we’re talking about.”
(Source: In the Church: Federal Vision: The Issue For This Generation by Melissa Morgan; ByFaith Magazine, Issue Number 17, October 2007;
URL: http://byfaithonline.com/federal-vision-the-issue-for-this-generation/ .)

Rev. Alan Strange, a pastor and professor at Mid-America Reformed Seminary wrote in the article “Understanding the Federal Vision” published in the February 2007 issue of New Horizons magazine (http://www.opc.org/nh.html?article_id=478 ) that these twenty errors were found to be “held by one or more advocates of the Federal Vision” by the Orthodox Presbyterian Church’s Committee to Study the Doctrine of Justification:

1. Pitting Scripture and Confession against each other.
2. Regarding the enterprise of systematic theology as inherently rationalistic.
3. A mono-covenantalism that sees one covenant, originating in the intra-Trinitarian fellowship, into which man is invited, thus flattening the concept of covenant and denying the distinction between the covenant of works and the covenant of grace.
4. Election as primarily corporate and eclipsed by covenant.
5. Seeing covenant as only conditional.
6. A denial of the covenant of works and of the fact that Adam was in a relationship with God that was legal as well as filial.
7. A denial of a covenant of grace distinct from the covenant of works.
8. A denial that the law given in Eden is the same as that more fully published at Mt. Sinai and that it requires perfect obedience.
9. Viewing righteousness as relational, not moral.
10. A failure to make clear the difference between our faith and Christ's.
11. A denial of the imputation of the active obedience of Christ in our justification.
12. Defining justification exclusively as the forgiveness of sins.
13. The reduction of justification to Gentile inclusion.
14. Including works (by use of "faithfulness," "obedience," etc.) in the very definition of faith.
15. Failing to affirm an infallible perseverance and the indefectibility of grace.
16. Teaching baptismal regeneration.
17. Denying the validity of the concept of the invisible church.
18. An overly objectified sacramental efficacy that downplays the need for faith and that tends toward an ex opere operato [automatically effective] view of the sacraments.
19. Teaching paedocommunion.
20. Ecclesiology that eclipses and swallows up soteriology.

Rev. Strange then went on to say:

“Some of these points, to be sure, warrant elaboration more than others. The doctrine of justification is indeed, as John Calvin wrote, "the hinge on which religion turns." As such, it is of the utmost importance that we get this doctrine right. This was the burden of the Reformers above all: if they did not get this doctrine right, then they did not get anything right, and the Reformation was an error or worse. ..

“Thus, what the Federal Vision teaches about justification is of the greatest concern...”

It is also reported by Steve C. Halbrook, owner of the blog “Flock Alert,” in his article “Is the Federal Vision Heresy?” that some of the major proponents of the Federal Vision also include James B. Jordan, Norman Shepherd, Peter Leithart, and Rich Lusk. And that FV “has much in common with N. T. Wright’s theology, and is essentially a form of Roman Catholicism in sheep’s clothing. It denies justification by faith alone, Christ’s active obedience, and perseverance of the saints, and holds to salvation by works (for instance, the soul damning heresy of baptismal regeneration).”
(URL: http://flockalert.wordpress.com/2009/06/19/what-is-the-federal-vision-is-it-heresy/ )

In conclusion, dear reader please be wise as a serpent and harmless as a dove while discerning truth from error and defend the Gospel. Shun those who preach another gospel than the one you received and may Sola Scriptura, Soli Deo Gloria, Solo Christo, Sola Gratia, and Sola Fide once more be our rallying cry. Amen.

“And the Spirit and the bride say, Come. And let him that heareth say, Come. And let him that is athirst come. And whosoever will, let him take the water of life freely. For I testify unto every man that heareth the words of the prophecy of this book, If any man shall add unto these things, God shall add unto him the plagues that are written in this book: And if any man shall take away from the words of the book of this prophecy, God shall take away his part out of the book of life, and out of the holy city, and from the things which are written in this book.”
- Rev. 22: 17-19 KJV

Ligonier Ministries: The Doctrine of Justification and the New Perspectives on Paul
http://www.ligonier.org/learn/collections/the-doctrine-of-justification-and-the-new-perspec/

A Puritans Mind: Reformed is Not Enough - Book Review
http://www.apuritansmind.com/book-reviews/the-black-list-reformed-is-not-enough/