Can you smell the strong stench of death blowing across this nation?

I have been regularly witnessing at the child-killing places (also known as abortion mills) since 2001, and the strongest impression left upon me has been the stench of death and the sight of trash littered around those "gates of hell." So, when I came across pictures of the trash left by the Obama Inauguration my heart broke... A picture really is worth a thousand words and what does this one say about America and our newly elected president?


Please click here for a news report of President Obama ending the ban on funding for international groups that promote or provide prenatal child-killing and then tell me if you can smell the strong stench of death blowing across this nation.
The book of 2Kings, chapter 21 tells us of a wicked ruler who sacrificed children and worshiped strange gods. His name was Manasseh and here is his story (please take note of God's response to the evil reign of King Manasseh and the judgment ordained for the nation of Israel):

"Manasseh was twelve years old when he became king, and he reigned fifty-five years in Jerusalem. His mother’s name was Hephzibah. And he did evil in the sight of the LORD, according to the abominations of the nations whom the LORD had cast out before the children of Israel. For he rebuilt the high places which Hezekiah his father had destroyed; he raised up altars for Baal, and made a wooden image, as Ahab king of Israel had done; and he worshiped all the host of heaven and served them. He also built altars in the house of the LORD, of which the LORD had said, 'In Jerusalem I will put My name.' And he built altars for all the host of heaven in the two courts of the house of the LORD. Also he made his son pass through the fire, practiced soothsaying, used witchcraft, and consulted spiritists and mediums. He did much evil in the sight of the LORD, to provoke Him to anger. He even set a carved image of Asherah that he had made, in the house of which the LORD had said to David and to Solomon his son, 'In this house and in Jerusalem, which I have chosen out of all the tribes of Israel, I will put My name forever; and I will not make the feet of Israel wander anymore from the land which I gave their fathers—only if they are careful to do according to all that I have commanded them, and according to all the law that My servant Moses commanded them.' But they paid no attention, and Manasseh seduced them to do more evil than the nations whom the LORD had destroyed before the children of Israel.

"And the LORD spoke by His servants the prophets, saying, "Because Manasseh king of Judah has done these abominations (he has acted more wickedly than all the Amorites who were before him, and has also made Judah sin with his idols), therefore thus says the LORD God of Israel: ‘Behold, I am bringing such calamity upon Jerusalem and Judah, that whoever hears of it, both his ears will tingle. And I will stretch over Jerusalem the measuring line of Samaria and the plummet of the house of Ahab; I will wipe Jerusalem as one wipes a dish, wiping it and turning it upside down. So I will forsake the remnant of My inheritance and deliver them into the hand of their enemies; and they shall become victims of plunder to all their enemies, because they have done evil in My sight, and have provoked Me to anger since the day their fathers came out of Egypt, even to this day.’” 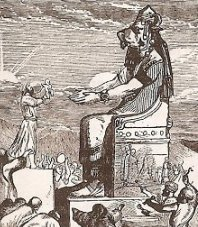 "Moreover Manasseh shed very much innocent blood, till he had filled Jerusalem from one end to another, besides his sin by which he made Judah sin, in doing evil in the sight of the LORD."

"President Obama understands that abortion is a divisive issue, and respects those who disagree with him. However, he has been a consistent champion of reproductive choice and will make preserving women's rights under Roe v. Wade a priority in his Adminstration. He opposes any constitutional amendment to overturn the Supreme Court's decision in that case.

"Jesus Christ is the same yesterday, today, and forever." - Hebrews 13:8

* Click here for a news report of President Obama restating his commitment to prenatal child-killing.

* Click here for the Obama Administration's Agenda for prenatal child-killing posted at Whitehouse.gov.

* Click here to read "Massacre of Innocence - The Occult Roots of Abortion" by Eric Holmberg and Jay Rogers.