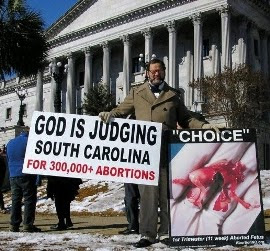 “For which of you, intending to build a tower, does not sit down first and count the cost, whether he has enough to finish it...” (Luke 14:28, NKJV)

One of the greatest blessings of being a Christian is the friends one makes while serving the LORD. I have truly been blessed with knowing and working with some incredible Christians who inspire others to follow the LORD wholeheartedly without reservation.

In the next several weeks I will be sharing some of their stories with you. I pray you will be blessed and inspired to follow Jesus Christ without reservation.

In August of 2006 I first interviewed Steve Lefemine, a pro-life missionary and director of a ministry called “Columbia Christians for Life” based in Columbia, South Carolina for the newsletter “Christian Activist Pro-Life News – 100% Pro-Life: No Exceptions, No Compromise.”

Here is the full text of the interview:

Q: How did you first know that the LORD was calling you to become a pro-life missionary?

A: The Lord has allowed me to be a full-time pro-life missionary for the last 14-plus years, since October 1991. Prior to that I worked part-time some, and lived off savings after having worked as an industrial engineer with an international tire manufacturer until August 1988. I left the tire company to work on the campaign staff of a Christian man running for Congress. He did not win the election, and I seriously considered an offer to become the plant manager of a new start-up plant. However, I had already become involved with Operation Rescue activities in Upstate South Carolina, after having gone down a couple times to the large national OR event in Atlanta in 1988, and the Lord was calling me into full-time pro-life work, which I committed in my heart to do in June 1989, while living in Anderson, SC. I would drive to Greenville, SC where there were three abortion centers at the time (today there is one), and hold signs and eventually sidewalk counsel there. After my savings ran out in January 1991, the Lord sent me to the state capital, in Columbia, where there were five abortion centers at the time (today there is one), and I began doing there, what I had done in Greenville. To support myself, I sold possessions, and worked part-time, mostly as a floor/rug flea-treatment serviceman ("Mommy, the flea man is here !"). Later that year, the Lord put it on my heart to depend on him by faith for provision (the discipling of another missionary was very timely and helpful here), which I did, beginning in October.

Q: How did your family and friends react when you told them what the LORD had put in your heart to do?

A: Family reaction has ranged from support and encouragement from my mother, to other family members who essentially told me I was wasting my life. Some just see it now as this is what Steve does.

Q: For those who are new to the pro-life movement, please tell us what is a "Rescuer"? And have you personally placed yourself between the baby and the butcher? Were you arrested for doing this?

A: A "rescuer" is someone who rescues babies from being butchered at the child-murder-centers. That includes doing the sit-ins ("rescues") that many thousands of Christians and other pro-lifers did in the late 1980's and early 1990's, as well as sidewalk counseling outside the death camps. Today, those who display the graphic pictures of abortion on the streets are rescuing children. Those who work in the crisis pregnancy centers and adoption agencies are rescuing children (I am adopted myself). Beginning in 1989, I was arrested numerous times for sitting in front of the doors of child-murder-centers in several different cities and states, including SC, NC, Washington, D.C., and NY (Buffalo). I've also been arrested several other times, including: while leading others to display graphic signs on the public sidewalk (Florence, SC); while praying on my knees on the sidewalk outside the White House as part of a prophetic witness after President Bush had recently authorized federal funding of embryonic stem cell research (when 19 pro-lifers were arrested on September 8, 2001, three days before 19 Islamic terrorists allegedly hijacked four planes to fly them into buildings); while interposing in August 2003 with 20 or so others around the Ten Commandments monument placed in the Alabama Judiciary Building in Montgomery by Chief Justice Roy Moore, which was later removed; and on other occasions as well. I was charged once while preaching (Columbia). I wish that "Church" Christians had a better understanding of the price being paid, and the battles and war being fought, by Christian pro-life "rescuers" around this country, in many cities and states, to preserve our God-given liberties of free speech, peaceable assembly, and freedom of religion. I wish the Church of Jesus Christ would wake up to the serious threat to their lives, liberties, families, faith, and fortunes in America today!”

Q: What are some of the other consequences you have experienced for your Christian witness and actions to protect the preborn babies from death?

A: As I expressed above, I have experienced being arrested many times. I also have been physically assaulted a few times. I have been asked to leave an evangelical church, not for disciplinary reasons, but because of what I believe are biblical stands on holding Christian politicians accountable, birth control, and the God-ordained roles of men and women. There have also certainly been financial consequences over the last 17 years during the time that I have been involved in full-time pro-life work.

“There is a cost to telling the truth, and acting upon it. Jesus said, "He that findeth his life shall lose it: and he that loseth his life for My sake shall find it." I found my life in Jesus by losing it for my own purposes, Hallelu-Yah !!! Jesus also said, "No man, having put his hand to the plough, and looking back, is fit for the kingdom of God." Amen.”
– Steve Lefemine, pro-life missionary

Q: Please tell us a little about "Columbia Christians for Life" and why you founded this ministry?

A: As I said earlier, the Lord sent me to Columbia from Anderson, SC in 1991. That first night, on February 1, 1991, I asked Him, now that I was here, what did He want me to do? I felt His answer to me was, go and do what you've already been doing. In other words, do in Columbia, what I had been doing in Greenville when I commuted to the abortion mills from Anderson. The next day I went to all five abortion centers at the time in Columbia, and did not see any Christian presence at any of them (I learned later there was one faithful group of men from an Anabaptist Church who came out Saturdays to one or two of the death centers to street preach, and I believe God used them mightily). That began a regular presence first at one abortion mill, which eventually closed after the abortionist was killed in an auto accident in 1995. Another abortion mill that the Anabaptist street preachers had gone to years earlier, and that we went to occasionally, went bankrupt and closed in 1995. Another mill that we had established a regular presence at, closed in 1999 when the Christian wife of a landlord who had just died of disease, refused to renew the murderer's lease, and he did not find a new place to rent. As we started a regular sidewalk counseling presence at Planned Parenthood, a smaller abortion mill across the street also shut down in 1999, leaving Planned Parenthood's murder center the sole free-standing death camp in Columbia, beside the smaller number of child-murders being committed at area hospitals. In 1990, there were over 5,100 child-murders-by-surgical-abortion reported in the Columbia area's then five abortion centers. In 2004, there were 1,335 such murders reported in the one remaining Planned Parenthood murder center. Columbia hospitals are still killing some children as well.

In the meantime, and over the years, the ministry has expanded to include outreach to 15 area government high schools, and the University of South Carolina, making almost 200 visits outside these area schools since 1997, while passing out over 10,000 packets with over 50,000 pieces of literature, tracts, etc., with the biblical truth about the sanctity of human life, abortion, chastity, and the Gospel of the Lord Jesus Christ (Messiah).

And during the months that the South Carolina Legislature is in session (early January to early June), I have been involved with working to get the Right to Life Act of SC passed (a bill to ban all abortion in SC) since it was first introduced in 1998, and began working to de-fund abortion and birth control and sterilization funding from the SC state budget in 1997.