Give Thanks to the LORD! 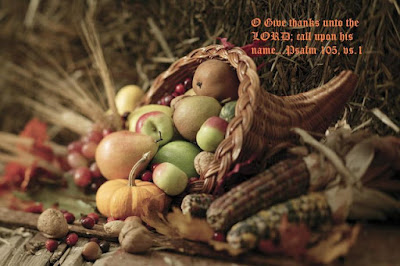 Oh, give thanks to the LORD!
Call upon His name;
Make known His deeds among the peoples!
1 Chronicles 16:8 – NKJV

As we prepare our homes for the gathering of family and friends this Thanksgiving season, let’s not forget to prepare our hearts in humble gratefulness to God for the blessings and grace which He has bestowed upon us as individuals and as a nation.

Here is a bit of history about Thanksgiving which you may not have been taught in school as taken from the website “A Puritan’s Mind” by Dr. C. Matthew McMahon:

“The celebration we now popularly regard as the ‘First Thanksgiving’ was the Pilgrims' three-day feast celebrated in early November of 1621 (although a day of thanks in America was observed in Virginia at Cape Henry in 1607)...

“The Pilgrims left Plymouth, England, on September 6, 1620, sailing for a new world that offered the promise of both civil and religious liberty. The Pilgrims had earlier left England in 1608, as the Church of England had curtailed their freedom to worship according to their individual consciences.

“The Pilgrims had settled in Holland for twelve years, where they found spiritual liberty in the midst of a disjointed economy (which failed to provide adequate compensation for their labors) and a dissolute, degraded, corrupt culture (which tempted their children to stray from faith). For almost three months, 102 seafarers braved harsh elements to arrive off the coast of what is now Massachusetts, in late November of 1620. On December 11, prior to disembarking at Plymouth Rock, they signed the "Mayflower Compact," America's original document of civil government and the first to introduce self-government...

“Upon landing in America, the Pilgrims conducted a prayer service, then quickly turned to building shelters. Starvation and sickness during the ensuing New England winter killed almost half their population, but through prayer and hard work, with the assistance of their Indian friends, the Pilgrims reaped a rich harvest in the summer of 1621.”

As we gather with loved ones, let us reflect upon these words about our God that tell us “Surely He scorns the scornful, but gives grace to the humble.” (Proverbs 3:34)

Friends, I fear we have scorned the Living God and the liberties he has entrusted to us by misusing them to indulge our selfish lustful hearts.

2 Chronicles 7:14 states: “If my people, which are called by my name, shall humble themselves, and pray, and seek my face, and turn from their wicked ways; then will I hear from heaven, and will forgive their sin, and will heal their land.”

I believe now is the time for us, the Church in America, to humble ourselves, pray, earnestly seek God’s face and turn from our wicked ways and follow the LORD wholeheartedly. Then we can truly say with the Psalmist: “Blessed is the nation whose God is the Lord; and the people whom he hath chosen for his own inheritance.” (Psalm 33: 12). Amen.