'for such a time as this' 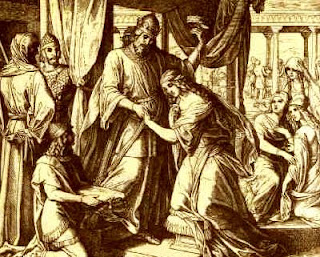 "...and who knoweth whether thou art come to the kingdom for such a time as this?"
(The Book of Esther 4:14C, KJV)

The famous 19th century Dutch theologian and Prime Minister of the Netherlands, Abraham Kuyper, is quoted as saying: "When principles that run against your deepest convictions begin to win the day, then battle is your calling, and peace has become your sin; you must, at the price of dearest peace, lay your convictions bare before friend and enemy, with all the fire of your faith."

I believe we are living in such a time that we need to lay all our convictions bare and fight with all the fire of our faith for a Christian Republic. Just one look at the headlines in the news should be enough to convince even the most hardened skeptic that our nation is in dire straits.

Even those who are not of the Christian faith must admit that the violence and injustice being perpetrated against American citizens is wrong. The streets of America are no longer safe. Totally depraved men and women prey upon children to fulfill their perverted desires, which includes sexual abuse and murder.

Homosexuals, whom the Bible refers to as sodomites, flaunt their unnatural desires in the faces of American citizens through perverted movies, television shows, and sexual parades. They have not only come out of the closet, they demand that we watch them simulate their vile sex acts on parade floats. They have no shame.

The headlines of today remind me of Founding Father Patrick Henry's words in the speech "Give Me Liberty Or Give Me Death" first spoken on March 23,1775:

"...it is natural to man to indulge in the illusions of hope. We are apt to shut our eyes against a painful truth, and listen to the song of that siren till she transforms us into beasts. Is this the part of wise men, engaged in a great and arduous struggle for liberty? Are we disposed to be of the number of those who, having eyes, see not, and, having ears, hear not, the things which so nearly concern their temporal salvation? For my part, whatever anguish of spirit it may cost, I am willing to know the whole truth; to know the worst, and to provide for it."

I believe that we can no longer shut our eyes to the truth that something is terribly wrong with America. We must do as Patrick Henry advised and seek to know the whole truth of what is happening to our country and then provide for it.

I made this covenant with the Christian Constitutionalists of the Constitution Party on November 8 of 2004:

I am totally committed to a vigilant and proactive approach to restoring our republic to the jurisprudence of its Biblical foundation.

I, Angela Wittman, make this covenant before you, the Christian Constitutionalists of the Constitution Party, and before the KING of all nations, Jesus Christ, with the full acknowledgment that a Covenanter will go to their grave willingly before breaking covenant with Lord Jesus and the Brethren.

A promise made is a promise I will keep.

I implore those of you reading this to investigate our national history, especially the Colonial period when the Puritans first founded our nation. You will see that our founding documents were for the most part written by Christian men who believed in God's law as the standard for civil government. Men, women and children shed their blood to settle this untamed land for the glory of God. And we have through apathy and negligence allowed the ungodly to spit in our God's face with their violence and immorality.

I pray it is not too late for America to repent... Please, come let us join together with fasting and prayer asking for God's forgiveness. Then let us put aside our differences and seek to make this an explicitly Christian nation with a return to God's law as the standard and a national constitutional amendment that will acknowledge Christ as LORD as advocated by the National Reform Association since 1864. (2)

Angela Wittman is a longtime resident of Southwestern Illinois. She has been writing Christian commentaries with an emphasis on reformed theology since 2001. Angela has been active in Illinois politics since 1993. She has served as a government school board member, Illinois Christian Coalition chapter leader and as co-chair (lady) for the Constitution Party of Illinois. She is now a member of the American Heritage Party and seeking to build the Kingdom through Explicitly Christian politics.